Piscataway was founded in 1666, and officially incorporated in 1798. The community, the fifth oldest municipality in New Jersey, has grown from Indian territory, through a colonial period and is one of the links in the earliest settlement of the Atlantic seacoast that ultimately led to the formation of the United States. Piscataway, located in Middlesex County, comprises 19.1 square miles, is 35 miles from New York City, and within 250 miles of one-quarter of the nation’s total population.
The community is ethnically diverse and has a fair percentage of apartments, townhouses, and condominiums although most housing accommodations are single-family dwellings. The township was named by MONEY magazine in 2008, 2010 and 2014 as one of the best places to live in the United States. Cited was the long and prestigious history of the community and noted also was that 189 buildings on Rutgers the State University campuses are located in Piscataway. RWJ Medical School, several data centers, and many national and international companies providing professional, scientific, and technical services are located in the township. The township has a highly educated workforce; 93.5 percent are high school graduates or higher.

The 339 individual townhouses range from 1259 SF to 2039 SF and have two and three bedrooms and two and 1/2 baths with den, basement, and garage. The kitchens showcase stainless steel appliances, ceramic tile floors, and solid wood cabinetry. Nine-foot ceilings, intercom system, plush carpet in bedrooms & den and a balcony or a patio. The Birch Glen Club House is centrally located and offers residents the convenience of a Business Center and a Party center for the residents. Also adjacent to the Club House other amenities are a full-size Pool; Tennis court and a playground area for children 8 to 12 years old. Two more outdoor Children’s Play Area for smaller children are also present as well as an outdoor running path with twelve different work-out stations as well as a basketball court. A shaded picnic area has been designed to relax outdoors. 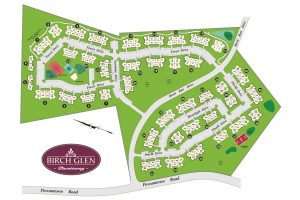